Travel Bug Addiction:
What's Behind It?

Is travel bug addiction detrimental? It could be, if it eclipses all other areas on individual's life. When it becomes a part of individual's identity, compulsion to travel begins to dominate wholeness of life.
And instead of being a vehicle of personal regeneration, desire to travel can manifest a feeling of lack and unhappiness.
Here is a quote from a letter of a person who seems to be in the heat of experience:"...and I cannot wait to be in that airport departures lounge leaving this miserable home life behind."

It is hard to observe travel bug addiction from the outside as it doesn't appear as aberrant within expected behavior of those who love to travel. The subtle indicator could be an abrupt frequency of sudden departures seemingly prompted either by availability of funds or by an enticing fare. These signs are intended for use as self-diagnosis and not to provide labels to assign to behavior of others.

Aloofness and Superficiality.
It is a sense of being in other place while being with other people. It could be experienced as a desire to protect own precious insight into the much larger world incomparable to banal concerns of these group of people or well defined norm of behavior. There could be a sense of revulsion toward pettiness of traditional life of material accumulation. There is a distinct disassociation with the present situation or a subtle withdrawal of intention to give one's energy as a way of avoiding being tied up.

Hostility toward Structure.
This is a mental position to experience oppositeness to what is embraced as a norm of a group. It could be felt as an impulse to debunk a set of expectations which are regarded important, but represent imposed limitation on a flow of life. Those could be expectations associated with stages of life: staring a career, buying a house, getting married to produce children, acquiring a status among the peers and a community and plan for old age. Seeing oneself as not being invested into the structure as a way of maintaining a reservation to leave spontaneously.

Intolerance to Stability.
It is the experience of a stable and predictable activity as complete loss of freedom. Thus the idea of holding a job with a career path is viewed as impediment to freedom. It also applied to relationships that lasts beyond the fascination stage and begin taking roots in more intimate knowledge of partner's psycho-dynamics. The relationship will begin to be viewed as a treat to the idea of being free to go travel on an impulse.

Reverse Culture Shock could lead to Addiction To Travel

Internal structure of a compulsion to travel reveals an intriguing and complex set of beliefs about reality and oneself.A young American I came across several times in a bar in Chiang Mai, Northern Thailand summed up the reason for his life on the road. He said that as long as he is traveling, he is not going to be discovered as a fraud, who in reality doesn't want much out of life except peaceful existence. He added that revealing this to his relatives and friends that follow traditional aspirations of a successful career, house and a family would destroy him, his world and all his relationships.

Taking this example, we can observe how travel itself became an identity for that individual. Very often travel bug addiction sets in when people let the discovery associated with travel become their life instead of it being a part of their life.

Possibly one of the ingredients of a drive to escape that constitutes travel bug addiction is our conditioning to be approval seeking beings. We were taught to define our worth through the eyes of the outsider observing us. We learned to believe according to a code acceptable to others.

At some point we find ourselves "locked up" in a system of evaluations framed by contorted reflections put on us by others. Deep down we know that reflections essentially are not true, but we don't know how to "free" ourselves from them. We attempt to disprove the system by putting up boundaries to our internal "free space" and withdraw into it.

Externally, the shortest path from feeling "framed" is to simply leave. It is easier to be with strangers, who don't have a credibility and a common history in our mind to affect us — we don't give their opinions much bearing. Therefore it appears that we found our fix — freedom to be as we are.

Another impulse that drives travel bug addiction — a compulsion to travel is our need for love and acceptance. Someone told me that upon return from long travel he found out that a common ground to connect with old friends had shrunk. He announced that after a while he realized that he had more common humanity with a random waiter in Thailand than with people from his old life.

When we travel, we find ourselves on a receiving end of other peoples' kindness even though we have to pay for it. But the emotional content of interaction is the same: we are accepted and cared for. On emotional level of perception it feels that we are finally "understood", "agreed with" and therefore we must be OK. We feel safe from awkwardness of confrontation and limelight of being misunderstood in our native environment. It might appear that we are finally in control of our world.

Another belief structure that feeds travel bug addiction — it fits perfectly in a mindset of a traveler and could be hard to uncover. It is a sense of emotional relief associated with transitory nature of travel. It is a feeling of invincibility, a sense of never being able to be pinned down. It is an opportunity to remain in a state of excited volatility — an emotional experience of freedom.

This mental construct is rooted in assumption that "I always have an opportunity to move on, to switch the scene, company or environment when it becomes dull or disagreeable". This co-dependent relationship with external conditions fails to recognize that satisfaction is an internal experience even it is seemingly induced by external conditions. 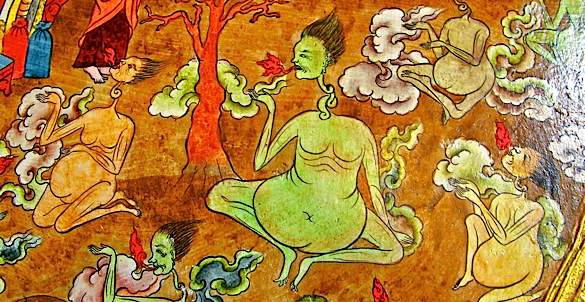 Description of a Hungry Ghost Symbol

Travel bug addiction is also supported by fear of getting to know who you are. Just like in a movie "Cold Souls", the actor Paul Giamatti was avoiding to look into his soul until his soul was stolen. Compulsion to travel could be perceived as a way to avoid seeing your emptiness and a desire to escape a pressing reality, without understanding of what it is and how it is created.

Unless frequent travel is a conscious choice, addiction to travel could be destructive and could interfere with psychological maturation, freedom and fulfillment of a heart's desire. It is the least fulfilling path to happiness, though it can give a temporary feeling of high.

The reason that there is no fulfillment in experiencing travel bug addiction is that the underlying belief that ignites the compulsion to travel is operating with on/off circuit. But as long as it is left unchecked, it remains operational. Once craving to travel or be away is on, the actions follow — you grabbed a ticket and are on the way, and it feels great you believe.

You might have noticed that after some traveling, you become restless again. Because the operating belief didn't get exhausted by your response-action. It just got temporarily switched off while you "consume" new experience.
After novelty of it wears of, it will turn itself "on" again to repeat the cycle. In extreme case, one person said that he even stopped paying much attention to which country he was going to next.
This kind of travel is quite contrary to therapy that a conscious travel could be. Travel therapy is an approach to travel where it is used as a method of self-renewal, self-nurture, discovery and transformation. Whereas being driven by travel bug addiction only perpetuates a cyclical movement of unconscious pattern