What is freedom? The meaning of freedom is representative of the meaning of human life itself. It is a fundamental need of a human being after necessities of physical survival have been met.

Freedom is not a concept, it is a state of being, that can only be experienced by an individual. It is not a conventional perception of civic and social liberty, yet that could be an essential framework for the environment in which an individual can practice freedom of being.

Freedom definition is like a liquid, which has no fixed form, but a quality of wetness is consistent no matter where or how we encounter it. True experience of freedom isn't free, it requires us to give up veils that obscure our ability to become authentic individuals.

In a way we can say that we are a one complex habit. Quite often a person acting in a particular way is driven by a habit that's gotten in a stream of consciousness.

To experience meaning of freedom and to break a habit is to get out of the habit of being that particular kind of person. You don't need to be the way you are — as it is only the habit that gives you a sense what you think you are. Just as you acquired this habit of "old self", same way you can get rid of it and become a new person, — a true individual — the one that is aware, emotionally positive, sensitive, responsible and continually creative. That is to be continually creative in regard to one own self.

That is a creative process of uninterrupted flow of cognizant awareness where an individual continually recreates oneself, becoming new constantly, where new self is better than the one before. That is what we may call a progressive self-renewal. 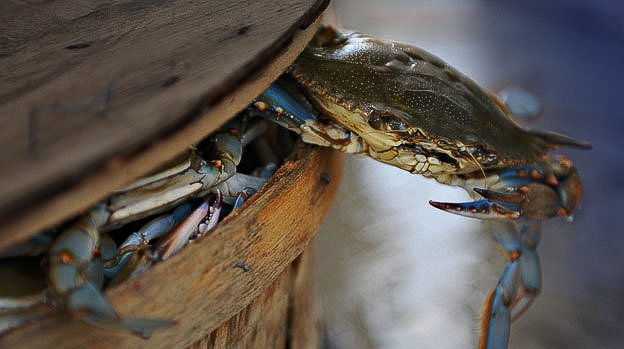 It isn't easy to get rid of an old self and recreate a new one. One of the reasons is other people, a group that we associated. It could be our family, workplace, school and professional or religious association. Just as you developed a habit of being in a particular way, so are the others got a habit of seeing and experiencing you in a particular way.

IT IS CALLED "CRAB IN A BUCKET" SYNDROME.

It originates from the said crab behavior. Basically if you put only one crab in a bucket, there's always a chance that it will find a way to run away. The old fisherman's trick is to put at least two crabs in a bucket. One will manage to cling to the other preventing it from a successful escape.

The group, or tribe does the same controlling behavior either through violent confrontation or a slow and invisible leverage of shame.

HOW TO FREE FROM TRIBAL SHACKLES by Elizabeth Gilbert.

Other people relate to us based on the idea of what we "were" and not what we "are". The group inherently displays resistance toward the individual to emerge. As it continues to relate to someone who is no longer exists, not as he is but as he was. That is why freedom isn't free as it requires to break a habit and become free from the old self.

Meaning of freedom is to break free from the group, from its influence reinforcing the old habit of being your old self. To recognize group influence does not mean that we have to break a relationship with the group, but perhaps gain some temporary distance. Though in some situations break is inevitable.

This is the latent opportunity that comes with solo travel. It is to have a space to grow, to have an experience of re-creating oneself free from interference of the group influence. It is for this reason, travel has an opportunity for transformation, a promise of self-discovery and a tangible definition for freedom.

Meaning of freedom through self-renewal

There could be a number of reasons for acting superficially, but one of them could reflect that we are divided internally. We may choose to act out of intellectual conviction, while emotionally being uncertain or resistant. Conscious part of ourselves might prompt us to act certain way, but we fail to bring emotions with it. In other words, we fail to act whole-heartedly, with the fulness of our being.

Create a plan to re-create yourself

Meaning of freedom can't be experienced living with a divided mind. It is like coming to a fork in a road and attempting to walk on both roads at the same time. The freedom of movement will be greatly impeded and the progress will be slow even non-existent.

To become free from the veil of superficiality we need to commit ourselves to what we choose wholeheartedly and to be fully present where we are. We need to stop having one part of us to be here with a choice of action, while the other having to explore other possibilities, either retreating into the past or prospecting into the future.

When we are undecided, we commit our creative faculties to a state of vagueness. By staying vague we subconsciously hope to avoid decisions and subsequent responsibilities. We use this veil to avoid committing, thus hoping to avoid facing the reflection of our decisions that may point out to the areas that require improvement.
Subconsciously we would rather be left in a status quo, preferring that things would just happen to us, instead of recognizing that by our action or inaction we create our experience.

We would rather stay vague in order to keep our options open, hoping that there would be a better option around the corner. We tend to believe that by avoiding decision we will spare ourselves from a scenario of being stuck with a "wrong" choice.

But by doing so we actually lock ourselves out of inspired creative expression, spiritual growth and a space to grow. We reserve our minds to stay clouded, indistinct, diffused and reactive.

To remove a veil of vagueness means to be able to think clearly, being able to review and sort out our priorities. It means to take responsibility for ourselves. It means to be willing to accept a creative process of self-mastery, an authorship of new self, the one that is emotionally positive, clear and acting from the depth of authentic conviction.

When returning from travel it would make sense to remind yourself of the glimpses into meaning of freedom. Simply commit yourself to stay vigilant against getting shrouded into these veils. Encourage yourself to continually re-create yourself and understand the influence of the group.

Only by being a true individual we can experience freedom. And it can only happen through experience of your personal insight.

Traveling alone with intention can give an opportunity for such intimate close contact with yourself and possibly have a breakthrough insight into a meaning of freedom.

Do not take a short-term view of your freedom practice. Someday you'll catch yourself being divided, someday you'll act out an old habit, — take a view of entire process, not a short period.

Avoid assuming confrontational position of a judge toward yourself — become your best ally instead, a reliable partner.

Surround yourself with people that accept your individuality and support your growth. The ones that encourage your curiosity and creative expression.

Top of Meaning of Freedom

Back To Return From Travel