Example of Tonglen Practice — How It Changed My Experience.

My example of Tonglen practice comes from the time when I first learned about it. I remember learning about a possibility of informal Tonglen practice — a practice on the spot. I was excited about opportunities this practice promised in transforming self-centered grasping of my mind. I had a great deal of inspiration to begin using it.

At the time I was working toward degree at University of Santa Monica and I had to commute from another city. Everything in my life seemed to be going nicely and it appeared that in many areas of my life I was reaching a balance.

I practiced Tonglen on sharing harmony and tranquility I enjoyed with those that did not have that — those that I envisioned were going through turmoil of their personal lives, poverty, ill health or confusion. I also was sending a light of freedom to those who were in oppressive situations, personally and as nations. It felt easy and it felt good to do the practice.

Then during my commute one day it downed at me how easily irritated I would become in LA traffic. There would always be somebody who would find a way to get my attention and "hook me on" with the way they choose to drive. Be it somebody who would be keeping unreasonably big distance in front of their car, or somebody who would choose to attempt to touch the rear bumper of my car.

There were those sneaky drivers that would weave in and out of the lane, thinking that they can beat the traffic, but in reality only cause other drivers to break, thus compounding the situation.

I started to observe myself being very irritated sometimes turning competitive, feeling like finding a way to revenge. Apparently I had these experiences for a while. It was not easy to notice because the causes for my feelings were justifiable, — they were "right there" — all the disrespectful and not so polite drivers. 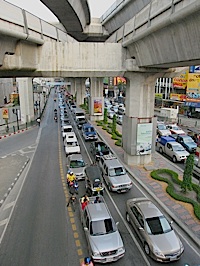 Then one day I observed how affected my inner state was: I felt angry, disrespected, even defeated. The best thing happened that   I became aware of it.

I decided to step out of my position of being right and feeling somewhat violated into doing Tonglen practice on the spot. I decided that I will practice for all those unhappy drivers that had to be in such a rush that they would drive in aggressive and inconsiderate ways.

It appeared that accepting my own frustration was the most difficult, after all "I was not considered" by whoever happened to be driving poorly. It became clearly that to completely accept my feelings, I had to give up a "justified" position of righteousness. I started with breathing in my own feelings of irritation, anger and humiliation. And breathing out a cool air of tranquility, peace and imperturbability.

After this stage, I followed the stages of Tonglen practice and started breathing for all other drivers that were feeling frustrated, pushy and stuck in traffic, or cut by other drivers. In my mind I was taking their feelings with the wish: "may you like myself be free from these feelings of anger and frustration, may you feel ease and grace instead". What begun to happen, was making me laugh.

I instantly noticed that my awareness was freed from state of alertness to look out for activity, and was relaxed in the time-space dimension where I was. I begun to notice my intention switching from "me first", to "may you be safe". My attention was changing from finding a reason to prove that other drivers were bad, to just driving mindfully.

The feelings were so different that I believed that traffic was actually changing for me — the experience of it definitely was. I kept practicing Tonglen on the spot in traffic for the next twenty-one day — to follow the Law of Transmutation with intention of building new neural connections in my brain by way of implanting deliberate new habits in subconscious mind.

Soon the traffic stopped being something special to look forward to or avoid; it appeared what it was — just an experience of getting to a destination by the means of driving car. Now I maintain a conscious intention when I drive for other drivers, those who are overtly ambitious and those that are timid: "may you all arrive safely to your destinations and enjoy the company of your loved ones".

When I see a car in trouble or a car pulled over by a cop, I instinctively recite a mantra for them " may you be filled with light of grace leading to the best outcome for the highest good of all concerned". That's how Tonglen practice on the spot transformed one unhappy driver, yet so many benefited.

Back To Tonglen Practice